You are here: Home › Book Lovers › The Weather Makers Re-examined 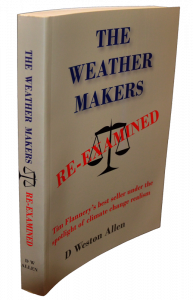 The Weather Makers Re-examined is the first comprehensive review and critique of
The Weather Makers – the 2005 best seller that propelled Tim Flannery to become the Australian of the Year (2007) and now the Climate Change Commissioner for the Gillard Government.

Leading IPCC reviewer, Vincent Gray PhD., calls Dr. Allen’s Re-examined “the most knowledgeable and comprehensive indictment of the global warming bandwagon.”  The former Director of the US Department of Energy and the Environment, William Happer PhD., tells the author, “The people of the world should collectively thank you, and maybe they will some day.”

Dr. Allen puts every chapter of Tim’ Flannery’s thesis on global warming alarmism under the spotlight of the most up-to-date scientific realism – in climate sensitivity to carbon dioxide, the reliability of the temperature records, sea levels, glaciers, the true state of the Arctic, Antarctic, Greenland, the Great Barrier Reef, extreme weather events, acidification of the oceans, oscillating Atlantic and Pacific currents and much more.

The Weather Makers is shown to contain 23 misinterpretations, 28 contradictory statements, 31 untraceable or suspect sources, 45 failures to reflect uncertainty, 66 over-simplications or factual errors, 78 exaggerations and over a hundred unsupported dogmatic statements, many of them quite outlandish.

Always a scholar and a gentleman, Wes Allen never uses ad hominem arguments, but treats Tim Flannery with courtesy and respect. His predilection for cautious understatement, however, makes for some humorous one-liners. For example, he says that after Flannery has diagnosed his beloved Gaia as suffering from a raging fever, he has nothing more to offer her than some feeble “homeopathic remedies.”

Excerpts from The Weather Makers Re-examined

On the real Flat Earthers of today
From cover to cover, Tim Flannery’s message is that ‘we are now the weather makers’.  Move over sun, moon, stars, planets, Earth’s mighty oceans, mountains and volcanoes – almighty man now rules the weather!  In the context of known geological and cosmic climatic forces, such an anthropocentric focus is almost pre-Copernican.

And as in the days of heliocentric Copernicus, scientists suggesting solar or other causes for climate change now find themselves denied grants and tenure, accused of links to ‘big oil’, ridiculed and rejected, or denounced as ‘deniers’ by a geocentric and anthropocentric orthodoxy.

On the patronage of depressing stories
Scientists have been falling over each other to break the most depressing story; and journals like Nature and Science have been eager to publish them.

On the dominant greenhouse gas
[Flannery says in The Weather Makers], “Earth’s thermostat is a complex and delicate mechanism, at the heart of which lies carbon dioxide.” If Earth does indeed have a thermostat, the heart of it has to be water – vast quantities of it.  It takes more energy to raise the temperature of one gram of water by 1 degree than of any other common substance.  The massive oceans, glaciers and lakes, comprising over 70 percent of the Earth’s surface, stabilise Earth’s temperature.  Water vapour, the dominant greenhouse gas, forms reflective clouds, precipitates as rain and transfers enormous quantities of heat vertically and horizontally around the planet.  Compared to water in all its forms, carbon dioxide is a small peripheral player.

On being alarmed about prosperity and development?
Flying over Eurasia, Tim Flannery [says he] looked down on the large network of city lights burning “so bright – with so much energy – as to alarm me.”  Would he find the darkness over densely populated North Korea more comforting?

On poverty and the deprivation of cheap energy
Poverty is a major cause of environmental degradation and destruction of habitat in Third World countries.  And without cheap energy sources, combating poverty is nigh impossible.   Think about the implications of that.

While the impact of climate change on malaria transmission is trivial, the impact of depriving susceptible nations of cheap energy could be enormous.  Tackling climate change by a quixotic war on carbon, instead of a war on poverty and malaria itself, may well prove costly and counterproductive…How many children could we save from malnutrition, malaria, gastroenteritis and AIDS if the money wasted on Kyoto was spent on proven preventive measures?

On the benefits of cheap energy
There is no recognition whatsoever [in Flannery’s book] of the enormous benefits to humanity from such [cheap] energy use.  What would be truly shocking would be a return to the short and brutal existence before 1800.  Even with his thousands of servants, France’s King Louis XIV could not be as well-informed, entertained, transported, engaged in as many recreational activities or enjoy as great a variety of food and beverage as the average Australian of today, thanks to our main servant – coal.

Our standard of living and quality of life is very dependent on cheap energy.  That is largely why we are three times as affluent as our parents.  If we greatly increase the cost of that energy, we will pay the cost with longer working hours for lower wages, and enjoy a lower standard of living, as many in Europe are now discovering.

Our ability to adapt to future climate change, warming or cooling, drier or wetter conditions will be dependent on a buoyant economy and thoughtful planning. If we stifle the economy with misguided mitigation measures instead of implementing effective adaptation measures, we are planning to fail.

The most immediate threat to civilisation as we know it might well be the sudden deprivation of cheap energy.

On a cooling planet being a greater danger than global warming
It is global cooling that threatens civilisation. The Little Ice Age was a dreadful time for humanity.  Famine and disease plagued Europe and expanding Arctic ice froze the Danes out of Greenland.  Global rewarming since 1850 has greatly benefitted humanity – and even the polar bear.

Despite warming in the UK from 1976 to 2005, there remained at least 120 times more deaths due to cold than to heat each year, largely due to adaptation measures.  Without adaptation, this ratio would still have been around 30.

The only way people can ‘rid atmospheric carbon emissions from their lives’ is to stop breathing!

On predicting the future
Who really knows what this century will bring?  Who could have dreamt in 1900 what that century would bring – refrigeration, antibiotics, effective birth control, the Green Revolution[in agriculture], high speed global transport, space travel, worldwide live TV, mobile phones, GPS, phenomenal computing power and the internet to mention just a few.  The safest prediction is for ongoing technological innovation with as yet unheard of marvels and energy sources.

On Flannery’s global warming remedies
After diagnosing Gaia with a raging life-threatening fever, The Weather Makers prescribes the equivalent of a homeopathic remedy.