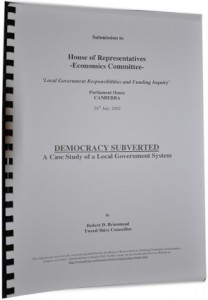 This book was written after the author, Bob Brinsmead, had spent 10 years in local government as a Councillor and Deputy Mayor of the Tweed Shire Council.

In its original form, the document was more provocatively entitled, Inside the Murwillumbah Mafia.

It happened that as soon as Inside the Murwillumbah Mafia was ready for publication, the Minister for Local Government in the Federal Government opened an inquiry into local government affairs, and invited submissions. The author thereupon changed the name of his paper to a less provocative title, and submitted it to the inquiry.

It was accepted and published by the House of Representatives Standing Committee on Economics, Finance and Public Administration in August 2002.

In theory, local government should be the most effective form of democracy since its stands closest to the people region by region. Bob Brinsmead points out that in practise, however, this is not true because local government is not recognized in the Constitution. As the creation of the state government, local government tends to be manipulated and controlled by state politicians and bureaucrats who subvert democracy by treating local decision-making with contempt. The author of Democracy Subverted tells a number of amazing stories (case studies) of how the bureaucratic systems of the state government defrauds local citizens of their rights and even of their wealth.